Kalki Temple in Jaipur is one of the best-kept secrets of the pink city. It is claimed to be the only temple dedicated to Bhagwan Kalki in the world! Kalki Temple or Kalki Mandir as is locally called is dedicated to Bhagwan Kalki, the last & future incarnation or Avatar of Bhagwan Vishnu in human form. As per Hindu mythology,  Kalki will save the world and usher us all into the Sat Yuga. Bhagwan is a Hindi word referring to God or the almighty.

Where is Kalki Temple in Jaipur?

Who is Kalki Bhagwan?

According to Hinduism, Kalki is the future & last reincarnation of Bhagwan Vishnu. According to Srimad Bhagavatam, Kalki Bhagwan will appear between Kal Yuga and Sat Yuga. His reference is also provided in Puranas. Kalki will appear when human values will fall drastically to save the World from evil forces.

Lord Vishnu has How Many Avatars?

As per Hindu mythology, Vishnu is considered to have ten avatars; the reason why the word Dashavatar is used. These are Matsya, Kurma, Varaha, Narsimha, Ram, Parshuram, Vamana, Krishna, and Buddha. Kalki will be the last avatar. Yet another long list of avatars of Vishnu exists. Some believe there are 22 avatars while others consider 24 avatars of Vishnu. There are many different opinions and beliefs on the number of incarnations of Bhagwan Vishnu. 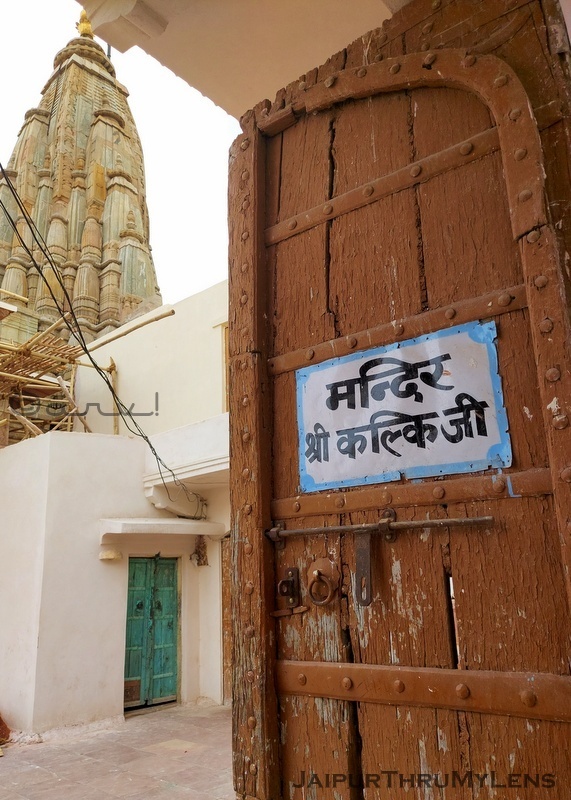 The Kalki temple can be accessed from a gallery through the arched gateway on the Sirehdyodi Bazaar road. The pathway has ramp-like steps. The temple is maintained by Devesthan Vibhag (the state govt).

From an architectural perspective, the Shikhar style is in line with the temples of its period. Marble and red sandstone have been used in the construction of the temple. The Mandapas of the temple are in three different styles of architecture.

When is Kalki Avatar Expected?

The temple has a separate unit that contains a beautifully carved horse made of white marble. People claim there is an injury mark on one of the legs of the horse. It is on self-healing of this injury mark, that the Lord Kalki will reincarnate on Earth to fight evil forces. The name of this white horse of Kalki is referred to as Devdutt. Many sources describe that Kalki Bhagwan will reincarnate riding on a white horse with a blazing sword. This is how one can identify Kalki Avtaar.

There is yet another legend, this horse symbolizes the Ashwmegh Yagya ( अश्वमेघ यग) undertaken by Maharaja Sawai Jai Singh II during his reign. There have been only a few Hindu kings who have performed this ancient ritual. However, this story seems to be out of place with reference to the temple of Kalki Bhagwan.

In Kalki temple, except for the main sanctum, the architecture appears to be quite simple and devoid of ornate carvings. However, near the Garbhgriha gate, there are carvings on the white marble floor depicting Gada and Shankh (mace and conch); symbols essentially denoting Vishnu Bhagwan. The Chaukhat (frame of the gate) is layered and beautifully carved.

Few sites on the internet have wrongly mentioned that the Kalki temple is closed until his reincarnation on Earth. It’s not true. It’s false information! You can visit Kalki Temple in Jaipur.

Is this the only temple dedicated to Bhagwan Kalki in the world?

There are other Kalki temples in India where the idol of Kalki co-exists with other Hindu Gods & deities, many people claim this is the only temple dedicated to Kalki Bhagwan. I’m not sure about the validity of this claim as many sites contest such claims.

Among all heritage temples in Jaipur, Kalki Temple does call for special mention, being the only temple dedicated to the Bhawan Kalki. Commissioned by the founder of Jaipur- Maharaja Sawai Jai Singh II surely adds to its attraction. 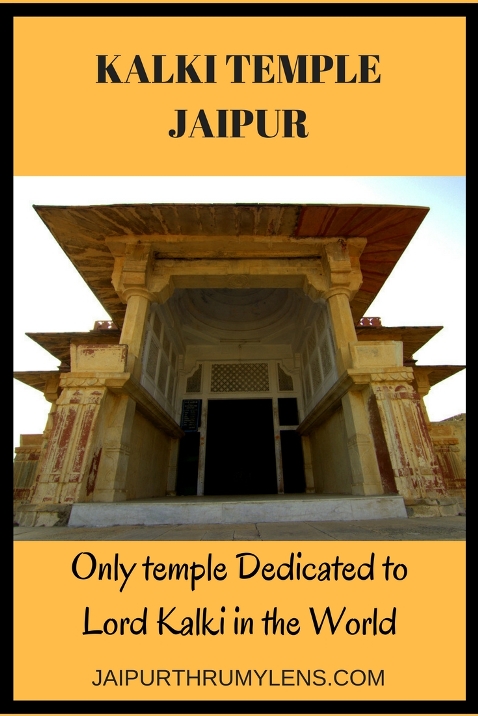