I visited Sri Ram Chandra Temple in Jaipur during the Goverdhan Puja which a day following Diwali. According to Hindu mythology, Diwali is marked with the return of Lord Rama from 14 years exile. As per the Hindu rituals, Goddess Laxmi is worshiped on this day. I’m not sure why Lord Ram is not worshiped on Diwali; is it because of the materialistic human nature? I visited, the only temple dedicated to Lord Rama or Ram in Jaipur. The temple is called Sri Ramchandra Mandir.

Queen of Jaipur, Maaji Sahiba under the rule of Sawai Ram Singh II  constructed Sri Ram Chandra temple in the 19th century. Details are not available on the year of completion of this temple. As per locals, the temple is 150 years old.

The temple is  run and maintained by the family of  priest residing in the temple complex. Priest claims that this temple was handed over by the King to his great-grandfather and his lineage is responsible for the upkeep and affairs of the temple. I’m not sure how far this is true, as a habit priest tends to add their own versions to suit themselves!! The temple complex is home to his family and the first courtyard is kind of shabby and unkempt.

The Sri Ram Chandra Temple is built-in Haveli style. The inner courtyard is quite majestic. The architecture and style give an impression of a royal palace.

Here are few pictures of the sanctum of Sri Ramchandra Temple, which has beautiful frescoes adorning the ceiling and walls.

The walls depict the scenes from the Ramayana. Many of these are famous scenes like the one with Lord Rama returning back to his kingdom in Ayodhya after 14 years of exile. Here are a few pictures. 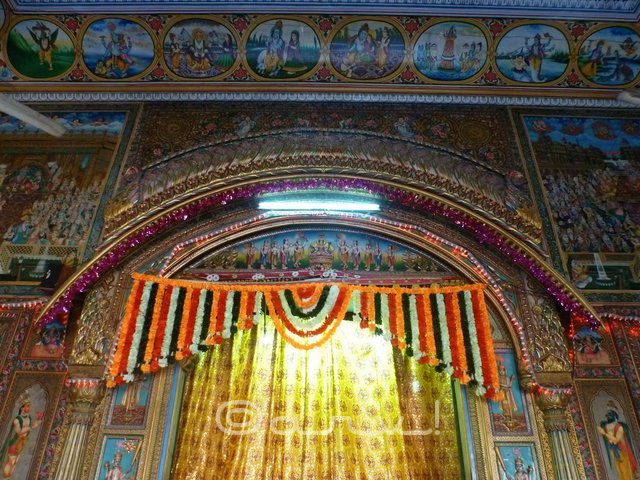 Here are some more elements from the temple, which shows the top-notch workmanship!

The people were waiting for the aarti to be performed.

One can have darshan or blessings five times in a day. These timings are pre-fixed and vary from season to season. Here are pictures of Aarti in progress.

Sri Ramchandra Temple is certainly one of its kind, being the only temple dedicated to Lord Ram in Jaipur. Its beautiful and has been maintained reasonably well. There is another temple in Jaipur with a similar name, located near Hawa Mahal, but it’s dedicated to Lord Krishna.

Do visit this temple, if you are in Jaipur.

Click here to check out other Heritage Temples of Jaipur 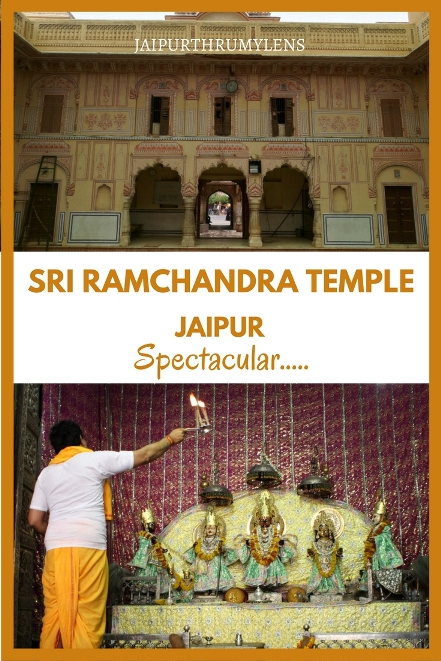