Many of you will be able to recall my previous posts on photo-walks in Jaipur. I generally prefer a solo photo-walk but at times I defy this pattern. I’d Rather join other photographers in Jaipur. During the last summer, I undertook a photo walk with a theme – shapes. It was all about shapes, lines, arches and so on. The photo walk took place during an early morning in the month of May, famed for being the peak summer month. The venue for this photo-walk was one of the metro stations in Jaipur. Twenty-five photographers participated in this walk.

Jaipur Metro started a few years ago with just one route and usually doesn’t see huge traffic. It seemed like an abandoned metro station on a Sunday morning due to low passenger movement. In any case, Ram Nagar station is not a prominent station on Jaipur metro route. However, there is something nice about this station. I’ll explain that a little later.

There wasn’t much to capture the theme at the metro station. It is quite small and basic. Sharing with you a few of my captures for this photo-walk. 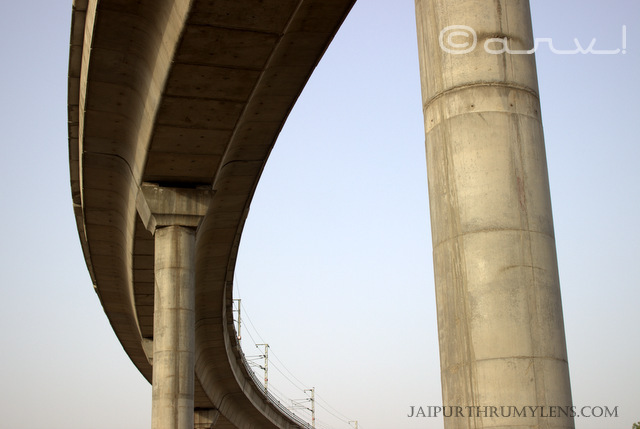 After capturing only lines, we found a handcart –Thela which allowed us to capture a few circles.

There are photographers who will go to any length to capture a perfect shot. I’m sharing a picture of one such photographer trying to capture this Thela from a different angle.

Finally, This is what makes Ram Nagar metro station stand out. There is a painting of Hawa Mahal on one of the walls. To impart a complete look the artists also added a few Rajasthani folk singers and dancers to this mural. This artwork was executed by the Cartist Jaipur. Click and head over to more such artwork by Cartists Jaipur.

In comparison to many other photo-walks that I have participated in, this one was low on the fun and learning. One of the most interesting photo-walks I have ever taken to date was the Eye-Less Photo Walk. Have you read this post? If not, then you must.