Khole Ke Hanuman Ji Temple is one of the most popular temples of Jaipur. Dedicated to Lord Hanuman, the temple is situated in an idyllic surrounding off the Jaipur-Delhi highway. It is nestled in a valley of Laxman Dungari hills. I’m sure most Hindu devotees of Jaipur must have visited this temple at some point in time. 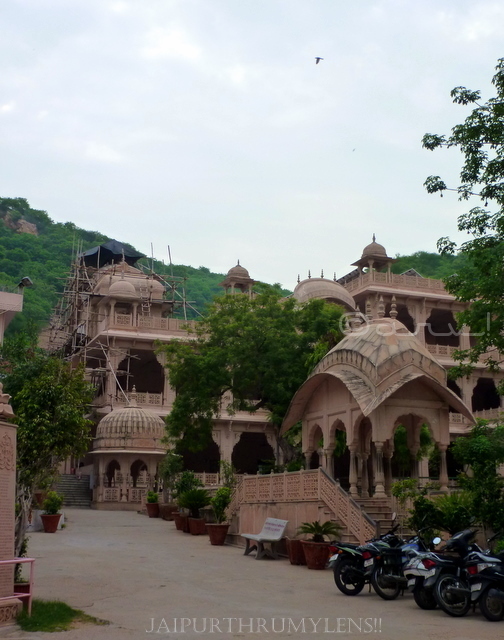 Made from Dholpur stone, a popular sandstone of Rajasthan, it replicates the architecture of a bygone era. The temple is famous for its many Rasoi’s (kitchen), Sawamani, and Dal Baati Churma Prasad.

What is Sawamani Prasad? It is an offering made in the Lord Hanuman temples by the devotees. Sawa means one and a quarter, Mani/Mun/Mann is an old Indian measurement system called Maund & equals 37.32 Kg. A Sawamani Prasad means 46.65 Kg of the offering. This is not usually followed strictly and is rounded off.

A Guide To Khole Ke Hanuman Ji Temple in Jaipur

What makes Khole Ke Hanuman Ji Temple so popular in Jaipur? It is hard to answer this question. It is certain that it is not linked with the history of Jaipur city. One of the oldest Lord Hanuman temples in Jaipur is Ghat Ke Balaji temple. The royal family of Jaipur has been one of its patrons, for years.

What is certain is the fact that Khole Ke Hanuman Ji Temple hosts a large number of Sawamani in Jaipur. The multiple kitchens here can serve thousands of visitors. The Sawamani’s are hosted in this temple on a regular basis. This kind of facility does make it very popular among devotees. It is common for people to host Sawamani on the occasion of birthdays too.

The temple was constructed in 1960 with an area measuring less than 100 sq feet. Over a period of time, the temple complex has grown to 300 times. It was founded by Pandit Radhey Lal Chaubey.

As per the popular legend, Pandit Ji was a resident of Jamwa Ramgarh and by a chance event, he spotted an image of Hamunam Ji carved on a rock during a picnic excursion. A few centuries ago, Baba Nirmal Das worshipped Hanuman Ji at the same site. This area was called Narwar Das Ki Khol. 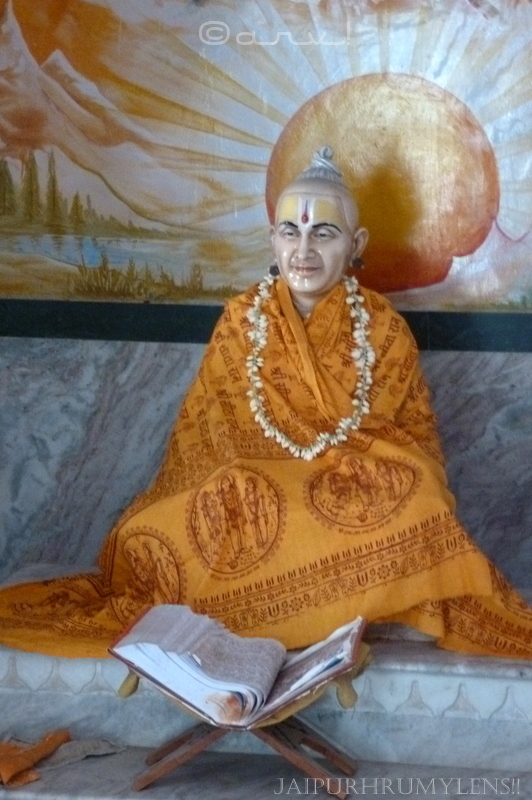 With the passage of time, the temple kept adding new annexure which explains non-homogenous construction.

Apart from the temple dedicated to Lord Hanuman, there are temples having idols of Lord Ram, Lord Ganesha, Durga Mata, and Lord Shiva.

An interesting addition to Lord Shiva temple is the replicas of Shivlings from the famous 12 Jyotirlingas in India. 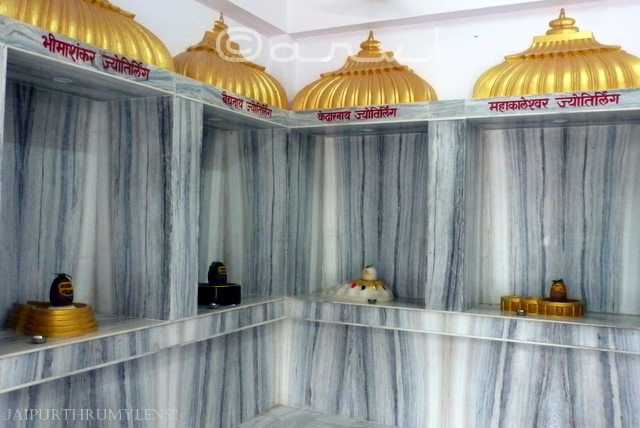 The Khole Ke Hanuman Ji temple has 24 kitchens which can serve Prasad to 5000 people in its dining halls. The traditional Indian system of serving Prasad has devotees sitting on a carpet on the floor of a dining hall. This is how Prasad is served in most temples and Gurudwaras. However, some dining halls now have the facility of tables and chairs.

During the tenure of the last government, a sum of Rs 27 Crore/ US $ 4 million was spent in the development of temple premises and infrastructure. Ten new kitchens, guest houses have been added along with a parking lot which can accommodate parking of 2500 vehicles.

It is surprising how authorities allocate such a huge sum of taxpayer’s money to private trusts for development in the name of religious tourism circuit. There are other private temple trusts who have also benefited from this act of “generosity”. It is a classic case having resources to influence government decisions.

There are many heritage temples in Jaipur that are being managed by Devesthan Vibhag under the state government and are in a bad shape. Devesthan Vibhag was formed after India gained Independence and it took control of all temples run and managed by the princely state of Jaipur. Most such temples are in a need of urgent repair and maintenance but this department doesn’t have enough resources.

I’m sure if the government allocates money to these heritage temples, it can help preserve our heritage as well as promote tourism.

Is it worth visiting the temple?

From architectural or heritage point of view? No. If you love visiting and exploring offbeat places, people watching, it is an interesting place as it is very popular among the locals. I can say without an iota of doubt that Khole Ke Hanuman Ji Temple is the most popular Lord Hanuman temple in Jaipur.

Locals visit this place in a great number during the monsoon when the number of Goth goes up drastically. Goth refers to a picnic in the local language. Indian month of Posh is also popular for organizing Posh Bada Prasad apart from the Sawamani. Sawamani refers to food usually Indian sweets like Ladoo offered by a devotee to the deity. The word is derived from the word “Sawa” meaning one & quarter and “Mann” referring to the unit of measurement used during colonial India – Maund or Mann. Therefore Sawamani usually involves offering approximately 47-51 Kg.

From Johari Bazaar Khole Ke Hanuman Ji Temple is approximately 7 Km on Jaipur-Delhi highway. The temple is located 2 km in a valley off the highway.

Khole Ke Hanuman Ji Temple is open throughout the day and one can have darshan from 5 AM to 9 PM.

It is easy to host Prasad at Khole Ke Hanuman Ji Temple. Even though the menu options are fixed, there are many variations to choose from. All you need to do is contact the management and check if any Rasoi is available on your chosen date. If it is available, you can book the same. The charges are based on the number of people and the menu. There is rent for the kitchen along with per person charges. The rent for the kitchen ranges from Rs 1600-9100. The most expensive being Rasoi No 23 & 24, rent for Rasoi 1 to 22 ranges between 1600-3100. The per-person charges for Rasoi 1 to 22 are Rs 200/person and Rasoi number 23-24 is Rs 500/person. Some of the Rasoi’s can host from 400-1000 people.

Is it the Most Famous Hanuman Temple in Jaipur?

Many people especially travelers from other countries get confused between Khole Ke Hanuman Ji Temple and Galta Ji Temple. Even though both these temples are close by there are many differences.

Khole Ke Hanuman Ji temple is definitely the most popular temple dedicated to Lord Hanuman in Jaipur, especially among the locals. It is not a heritage temple, the construction is fairly new and ongoing.

Galta Ji on the other hand despite being called the Jaipur Monkey temple is dedicated to Lord Rama. So if you are looking for the Monkey Temple, this is the place to go. You will find hundreds of monkeys at Galta Ji. It is a historic heritage temple. 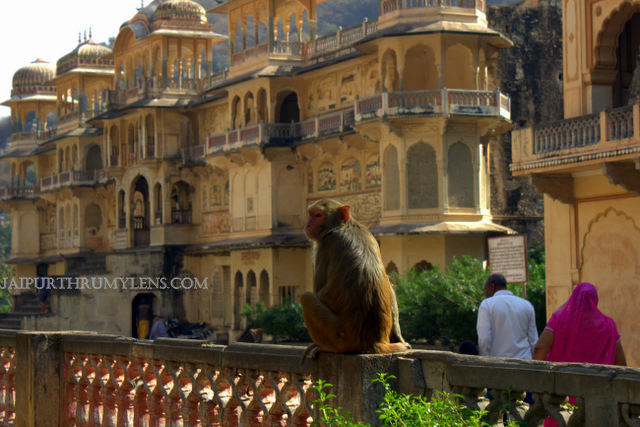 I can recall playing in sand dunes on every visit to Khole Ke Hanuman Ji Temple during my childhood years. The temple wasn’t that developed and there were many sand dunes in this area. Kids racing on the way up was very common and so was rolling down by losing balance. All that has changed now and chances of spotting a sand dune is not easy though there are a few left, even now!

Have you ever rolled down a sand dune?

Check out other Heritage Temples Of Jaipur