Statue Circle is one of the best places to visit in the morning in Jaipur. Its prime location and open space remain a big draw among the walkers. Some people enjoy walking on a roundabout, despite it being a busy road. I got lucky to witness a stunning one evening. Statue Circle is definitely not a sunset point in Jaipur. The winter setting sun is a visual treat. Here is a picture of the sunset from my visit. 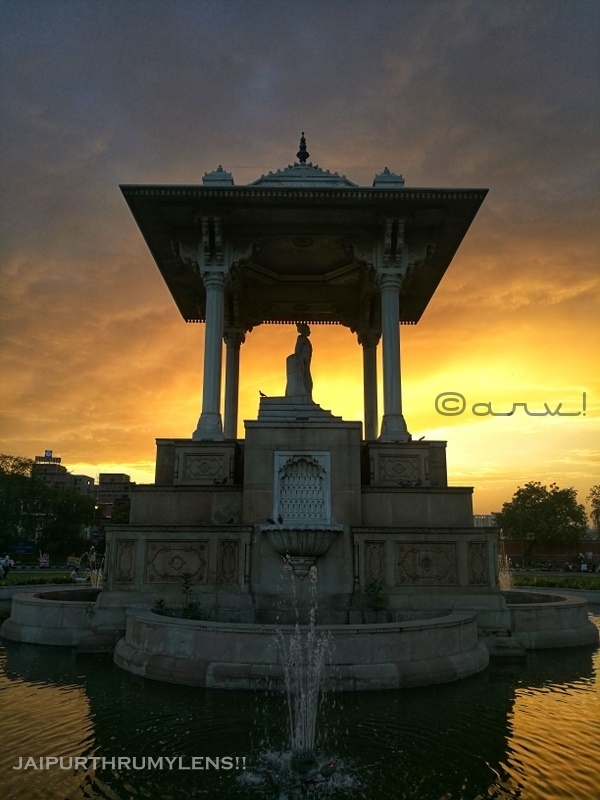 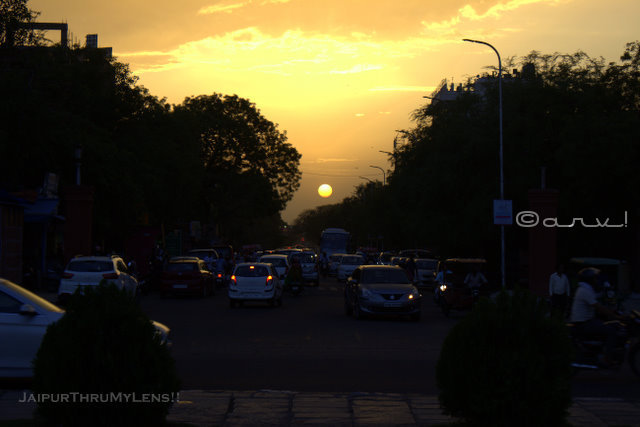 It remains an equally popular place during the evenings. Why so? It is frequented by the locals for coffee. A couple of coffee kiosks serve both hot and cold coffee. The coffee here is popular because it is milky, sugary and topped with lots of froth. 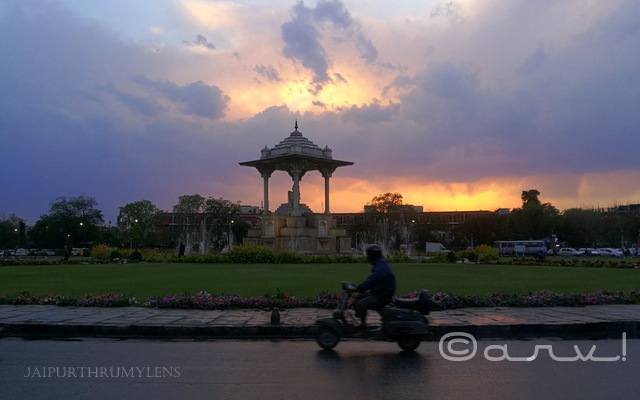 Read: Colors of the sky

Many people dislike strong coffee and prefer mild and milky coffee concoction. South India is an exception where strong filter coffee rules. Another reason which adds to its popularity is affordability. A cup of hot coffee costs Rs 50 for a cup which is one-third of the cost of coffee in most cafes in Jaipur.  Also worth mentioning, Statue Circle cold coffee is equally popular. 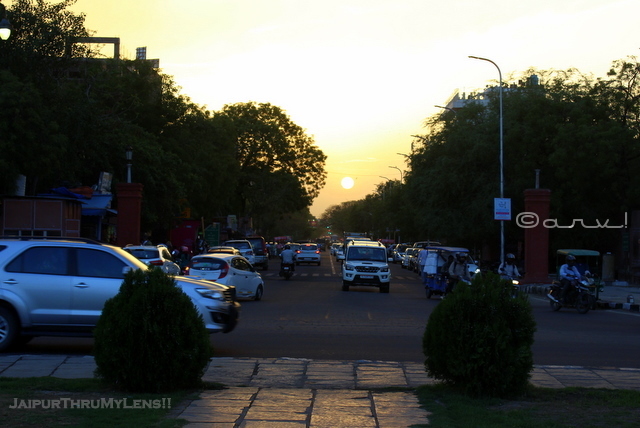 Statue Circle was commissioned during the rule of Maharaja Sawai Man Singh II, during the pre-independence period. The presiding minister, Mirza Ismail proposed placing Sawai Man Singh II’s statue as a memorial but it was turned down. In lieu, Maharaja Sawai Jai Singh II‘s life-size idol was placed as he is the founder of Jaipur. People started referring to this memorial as Statue Circle since it has a large roundabout.

The statue possesses a few unique elements to honor Maharaja Sawai Jai Singh II like his penchant for astronomy. He built five solar observatories in India out of which only the one in Jaipur- Jantar Mantar is fully functional and well-maintained. This beautiful memorial is built out of white marble and sandstone having many local motifs and architectural elements. 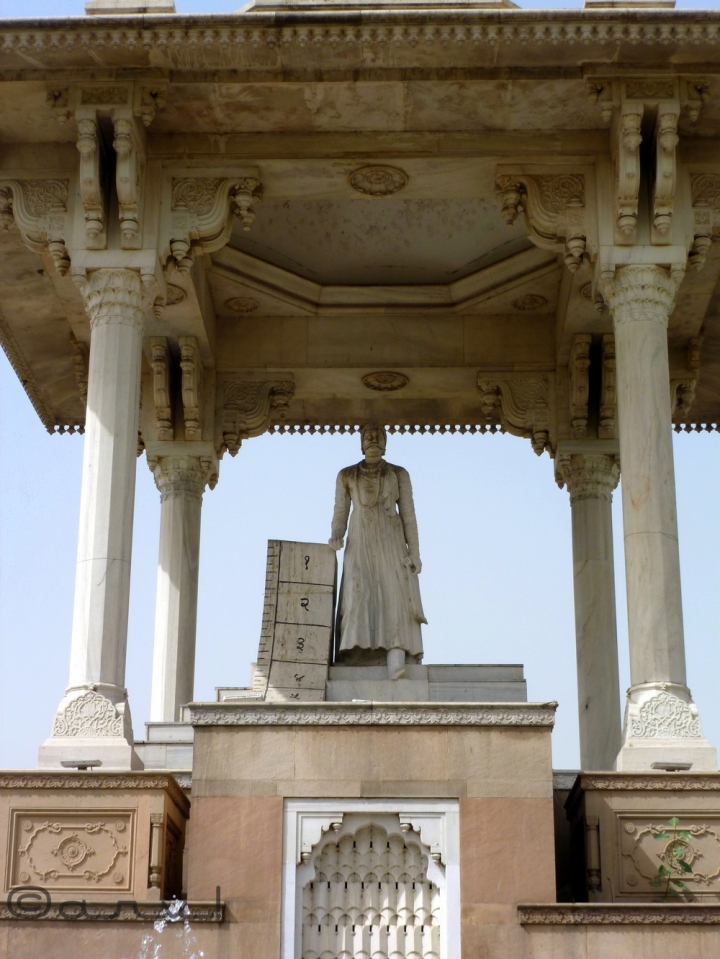 I do love visiting Statue Circle though I don’t enjoy the coffee here; I prefer a strong coffee. Statue Circle coffee kiosks cause traffic snarls. The customers park their vehicles in a manner that disrupts traffic. Since it is a public place, one can find many street vendors selling a variety of things to eat like ice-creams and chaats.

Statue Circle is a well-recognized place for holding political rallies and demonstrations as is Amar Jawan Jyoti, closeby.

The statueCircle is one of the well-decorated places during Diwali in Jaipur. 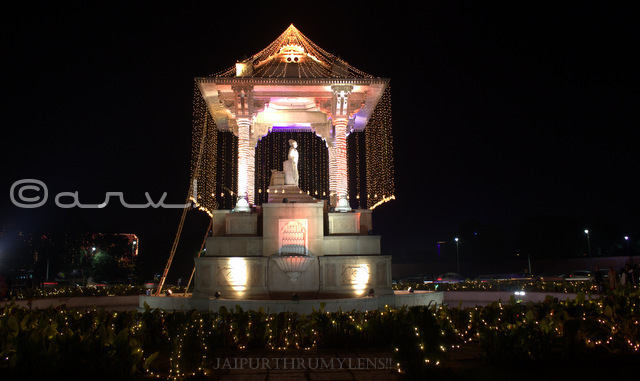 Where is Statue Circle

Statue Circle is in C-Scheme, a popular locality in the heart of Jaipur city.

Directions to reach Statue Circle. The most familiar landmarks in the vicinity are The Birla Auditorium, Rajasthan Commercial Taxes office, and the Secretariat. Even the most popular park in Jaipur, the central park is in the vicinity.

Statue Circle can be visited anytime; there are no fixed timings. 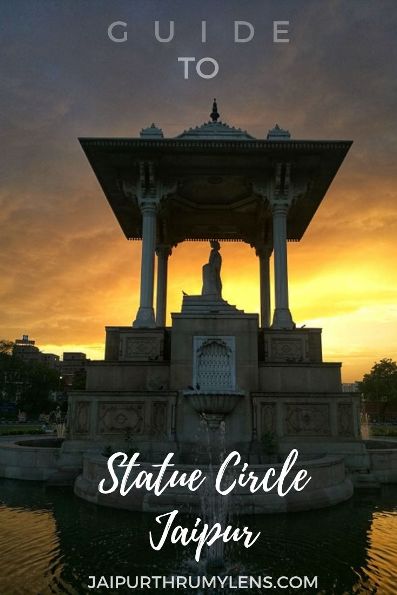 60 thoughts on “An Evening At Statue Circle In Jaipur”