Bhangarh Fort, located 90 Km away from Jaipur, is claimed to be India’s most haunted place.  Locals refer it as Bhangarh Ka Kila.  It takes close to 2 hours to reach Bhangarh Fort from Jaipur via Agra Highway and involves taking a detour from Dausa town. The road connecting Dausa to Bhangarh is not really in top condition, thereby reducing the speed on this 40 km stretch.

Bhangarh Fort ruins are surrounded by the Aravali hill ranges.The nearest human habitat is located approximately 5 kilometers from these ruins, in a village called Gola ka baas. This kind of adds to the Bhangarh Fort ghost stories.

Upon entering the main gate of Bhangarh Fort, there is a temple on the right side. This temple is dedicated to Hanuman ji. There are many other temples in the Bhangarh complex. Religious rituals are performed in only few of these. In the rest, the deity is missing and are dysfunctional temples like Gopinath Temple.

The first thing you notice when you enter Bhangarh Fort ruin is the row of unfinished shops of Jauhri Bazar. Roof is completely missing in these shops! As per popular Bhangarh Fort story it is a result of a magician’s curse. I’m not sure if this is true!

There is a popular story behind Bhangarh Fort but it’s hard to believe in absence of any strong evidence. The most popular one is about a curse by a Tantric and Ratnavati the princess of Bhangarh. Another story claims there were  gold mines in the vicinity and once the mining stopped (due to exhaustion of ore) the people decided to move out of the Bhangarh. It’s hard to believe this too, as this region is pretty strong in agriculture giving people little incentive to relocate. I will refrain from going into details of mystery of Bhangarh Fort as internet is replete with such stories.

This is information board affixed near the entrance of Bhangarh Fort by ASI (Archaeological Survey of India).

The site is frequently visited by locals as well as tourists. Even on a weekday, locals outnumber tourists. You will also come across students and youngsters who come here to meet Bhangarh Fort Ghosts! Usually these are students from Jaipur, Alwar or Dausa.

The Bhangarh fort is fortified with three different level of walls.

The 5 story Bhangarh Palace is the focal point of these ruins.

On entering the palace section of Bhangarh Fort, one encounters a terrible stench. It is difficult to figure out the precise reason or origin, but one likely reason could be the bat droppings. Yes, there are lots of bats in the palace complex.

Once you cross this level, you reach the intermediate level. This  seems to be the main part of the palace which is evident from the architecture and the detailing on the stones. This entire level is in dilapidated condition.

In monsoon, the surrounding area is carpeted with green color.

There is a  temple in the center of this floor which now is in a ruined state.

It is not uncommon to find pieces of broken bangles, perfume, clothes, nail polish etc inside this temple indicating that people visit this place for witchcraft and occult practices. Many locals say that often many babas visit Bhangarh Fort during midnight to perform black magic. Visiting Bhangarh Fort after sunset is prohibited as per ASI board.

From this floor, you can have an expansive view of the surrounding area. It is being claimed that the floors beyond this level were completely destroyed and it seems convincing too. Bhangarh palace was supposedly a 7 story building. Here are few wide angle Bhangarh Fort images.

Locals frequent Bhangarh Fort. It’s best to avoid Bhangarh on Sunday or any national holiday due to crowd. It’s bound to spoil your “Bhangarh Fort experience“.

Do keep in mind that food is not available in and around the Bhangarh Fort complex. May be you can buy packaged chips, biscuits and tit bits in few shops located in the nearby village… that’s it! There are no decent restaurants/ dhabas or eateries around the Bhangarh Fort. The lawns inside the complex  make for a  perfect picnic spot if the weather is pleasant and you are carrying the food basket with you! However, the ever present monkeys are a big deterrent! Don’t even attempt it!

Edit: Oct 2017-  Some restaurants and Dhabas have recently sprung up owing to large tourist influx. Hotel Raj Palace near Bhangarh Fort parking is probably the best around.

Though I can’t claim to have experienced anything paranormal in Bhangarh Fort but one gets a very eerie feeling out here….something that’s not normal and difficult to describe! People often claim to have captured Bhangarh fort ghost videos, which in my opinion are fake. So, you need to experience Bhangarh Fort yourself which is claimed to be most haunted place in India. 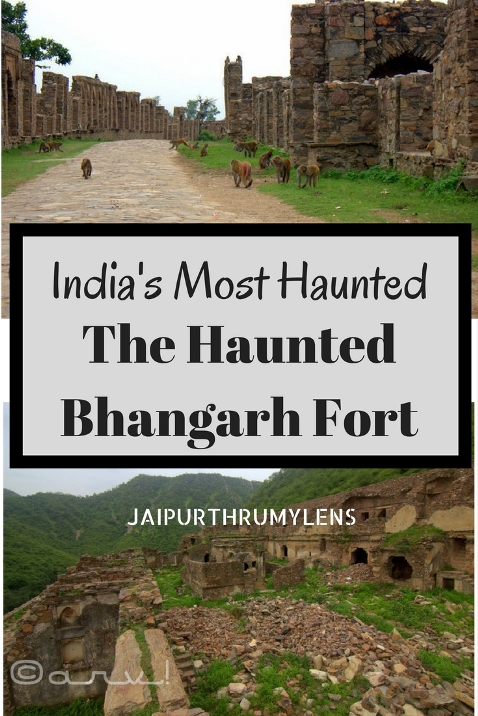 171 thoughts on “The haunted Bhangarh Fort – India’s most haunted?”