Ganga Ji Temple of Jaipur was constructed in 1914 by the then Maharaja of Jaipur, Sawai Madho Singh II. It is believed that the idol placed in the sanctum of the Ganga Mata temple, was worshiped by one of the queens of Maharaja prior to the construction of the temple. This temple is located close to Govind Dev Ji temple The temple management at Ganga Mata Temple does not allow photography on temple premises.

The rulers of Jaipur always considered themselves as the descendants of Lord Ram, through his son Kush. Therefore, they were called Kushwaha or Kachhawa  Rajputs. Therefore Ganga river was considered divine & sacred. It is an established fact that Maharajah Sawai Madho Singh II used to drink only Ganga Jal (water of the river Ganga). He would often visit Haridwar, which is situated on the banks of the river Ganga, as it would calm his mind. Such was his love and devotion for the river Ganga.

Maharajah Sawai Madho Singh II’s travel to England in 1902 to attend the coronation ceremony of King Edward VII is famous as he was the first Jaipur ruler to travel abroad. In those days, journeying beyond the country’s boundary was a big taboo for the pious & devout Hindus due to the strict religious & moral restrictions imposed by the society and religious leaders. To overcome this problem, He carried two huge silver vessels each containing 4000 liters of Ganga Jal to ensure his adherence to the strict religious norms. These silver urns are on display in the Sarvatobhadra Jaipur City Palace, even today. Here is a picture of this part of City Palace.

Ganga Jal enabled the Maharaja to undertake the travel to England to attend the coronation ceremony of King Edward VII, who had visited Jaipur in February 1876. 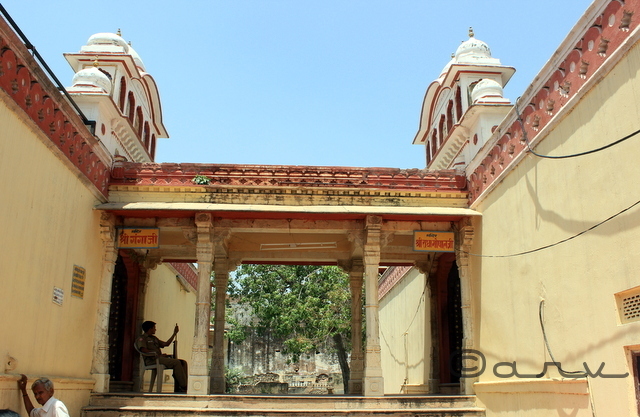 The temple is connected with another temple – Radha Gopal Ji temple via a covered gallery. On the left side is the Ganga Mata temple and on right is Radha Gopal Ji Temple. There is an open courtyard in the temple just after the entrance. The marble pillars feature carving and artistic workmanship.

The temple is constructed in a very simple style & is quite small. Marble has been predominantly used in the construction of this temple.

Two beautifully carved small pots made out of white marble resembling the City Palace Jaipur have been placed on either side of the courtyard. These are used to house the sacred Tulsi plant, which has immense importance in the Hindu religion. These two pots are the most attractive elements in this temple complex, which otherwise is quite basic from the architectural point of view.

How to reach Ganga Mata Temple: Temple is located just behind the Govind Devji temple.

Timing: The temple timing is the same as that of Govind Devji Temple. You can check the current Darshan timings on