Temples represent an essential aspect of Indian culture. This is one of the things most foreign travelers look forward to discover during their Indian travel experience. Like many other cities in India, Jaipur has temples at every nook and corner, especially in the walled city area. However, only a few temples enjoy a substantial following, attracting a swarm of devotees. A visit to Govind Dev Ji Temple and Moti Dungari Temple form a significant part of the daily lives of many residents. I have written about one of these temples – Govind Devji Mandir in a few of my write-ups. Govind Devji Temple is dedicated to Lord Krishna and Moti Dungari Temple,Lord Ganesha.

It wouldn’t be inappropriate to say Moti Dungari Temple is akin to Siddhi Vinayak Temple in Mumbai. On Wednesdays, the area around the temple gets swarmed by devotees causing traffic snarls. Thousands of devotees conduct a mandatory visit to pay respect to the deity.

Moti Dungari Ganesh Temple was built by Seth Jai Ram Palliwal in 1761 AD. Sawai Madho Singh I, the king of Jaipur was an ardent follower of Lord Ganesha. During one of his visit to his in-laws in Mawli, Mewar, he wished to construct a Ganesha temple in Jaipur. The king of Mewar instructed the Ganesha idol to be transported to Jaipur by a bullock cart. According to popular legend, the cart stopped at the base of Moti Dungari hill and couldn’t be moved. It was decided the temple be built right at this spot assuming it a wish of God. Here is a picture of Moti Dungari Hill with a fort. 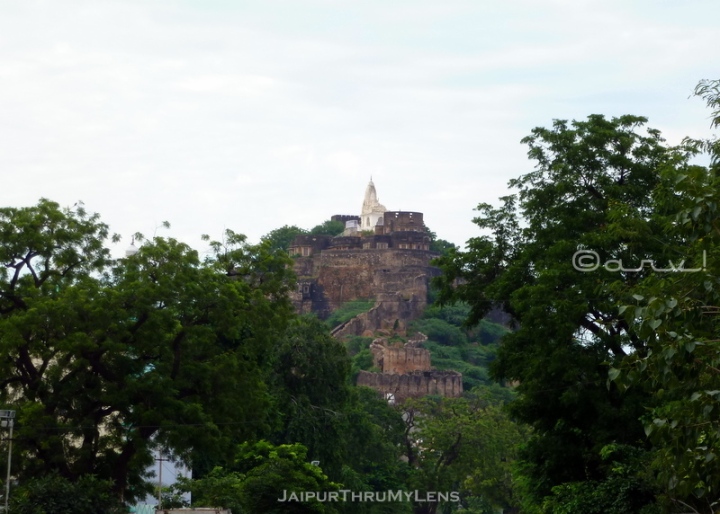 Some sources mention the name of Mahant Shiv Narain as a person instrumental in founding this temple. The idol of Lord Ganesh is presumed to be 750-900 years old. Here is an old picture of Moti Dungari Fort from a postcard. Source- Google. 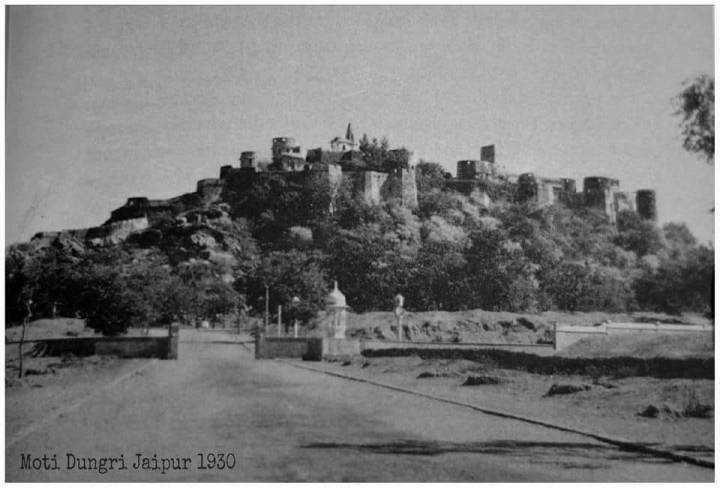 The idol of Ganesha is in the sitting form and wears a vermillion color which is considered as the dress. The temple architecture doesn’t have any striking outward characteristics and is comparatively small.

As per tradition, People visit this temple to seek blessings of the lord before starting any new venture or auspicious work. It an essential part of Hindu customs. 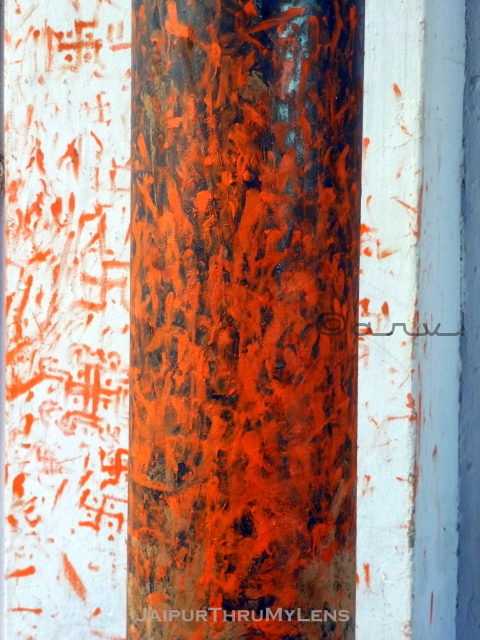 Lord Ganesha is considered to be an obstacle remover. Therefore, people visit here for a small ceremony on the purchase of a new vehicle and to invite Lord Ganesh for auspicious events like marriage. It is difficult not to notice the shops selling Besan Ladoo in the vicinity. This is the most popular offering people make in the temple. 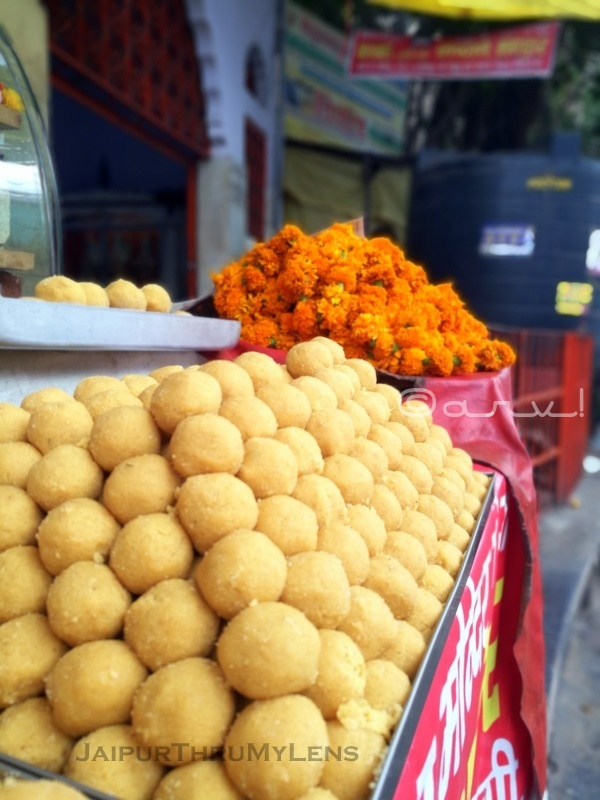 Over the last few years, the temple was involved in a court case as the temple authorities placed barricades obstructing the road leading to the temple. This resulted in inconvenience to the public as it was an encroachment. Moreover, metal railings were installed on the road for maintaining a queue system for entry to the temple. This too created a public nuisance. The court ruling went against the temple management, and amendments were made suitably. 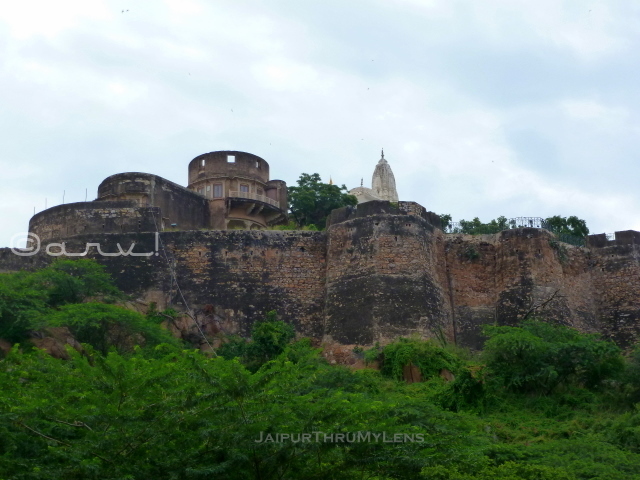 It was one of the preferred places of Maharani Gayatri Devi, the last queen of Jaipur. She spent considerable time in this fort and Rambagh Palace, which is closeby.

The kind of aura Govind Devji Temple commands is immense and unrivaled. It hasn’t changed ever since the city was founded. The following for Moti Dungari Temple, on the contrary, has gone up during the last 50 years. Therefore, in many ways, both temples are incomparable. One can experience the respect Govind Devji commands in the heart and minds of people.

The probable reason for this difference can be one of this analogy. Ever since Jaipur was founded, the Jaipur royalty considered Govind Dev Ji as the real ruler of the city. Many of the rulers would start the day with Darshan of Govind Devji. This wasn’t the case with Ganesh Ji Temple. The oldest Ganesha temple in Jaipur is Garh Ganesh Temple in Brahampuri established by Maharaja Sawai Jai Singh II. It is a historic temple.

It follows a system of 7 Darshan (windows) whereby a devotee can seek blessings in the temple. Arti takes place many times in the chosen time slots. Here are the slots.

Wednesdays are crowded. One should watch out for pickpockets. As is customary in temples across India, footwear needs to removed before entering the temple. It is best to handover and obtain a token from the incharge for safekeeping of your footwear. Beggars too pose a big nuisance. Reading more on begging issues in India. Other than Wednesdays, the temple doesn’t have so much crowd.

The biggest highlight of the temple is celebrating Ganesh Chaturthi. The celebration lasts more than a day and culminates in a procession which travels all the way to the base of a Garh Ganesh Temple hillock. Here is a picture of the view from Garh Ganesh Temple.

Why is Moti Dungari The Most Popular Ganesh Temple In Jaipur?

Places to visit nearby

The Birla Mandir is a popular place visited by the tourists which is just a few meters near Moti Dungari Temple. It makes a great sense to club this with a visit to Birla Mandir. Here are a few pictures of Birla Mandir Jaipur. 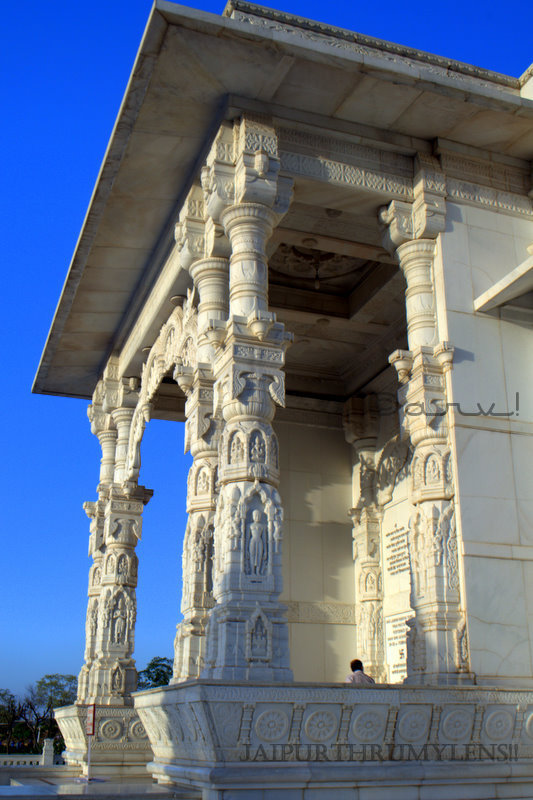 50 thoughts on “Why Is Moti Dungari The Most Popular Ganesh Temple In Jaipur?”