Jagat Shiromani Temple of Amer near Jaipur is also known as Meera Bai Temple. It’s one of the most beautiful and ornate temples of Amer. I’m sure you must have heard about Amer Fort. In case you haven’t, it’s a UNESCO World Heritage Site under the category of “Hill Forts of Rajasthan”. Amer Fort tops the list of places to visit in Jaipur. Here are a few pictures of Amer Fort.

Beautiful Amer Fort complex as seen from a different angle.

Expansive view of the Amer Fort along with the Maota lake.

Jagat Shiromani Temple has become popular among tourists over the last few years.  It’s an irony that residents of Jaipur are unaware about this temple. There is a popular opinion that this is the only temple of Meera Bai in Rajasthan. I’m not sure about this claim but surely this is the only Meerabai Temple in Jaipur. It is one of the best example of temples built on raised pedestal.

Jagat Shiromani Temple is a tranquil and serene place. Isn’t it one of the reasons why we visit a temple?

Jagat Shiromani Temple dates back to 1599 AD and it took around 9 years to be built. The temple was built in memory of Maharajah Sawai Man Singh I ‘s eldest son Jagat Singh by his mother Rani Kanakwati.

The temple has two entrances. It can be reached from the fort road in Amer town, its main entrance. The other one is through the flight of steps from Amer Fort. Here is a picture of the steps leading to the temple.

The most striking features of this temple are the marble Torans (pylon). The Torans are the ornamental arch of the gateway. It is said that these Torans are made from a single piece of marble. That’s commendable! Torans are usually found in Jain Temples.

Jagat Shiromani Temple is built using three different types of stones -local stone (possibly some sort of sandstone), marble, and black stone (probably granite). The use of multiple stones has enhanced the beauty of the temple architecture, making it distinct. Temples in the vicinity are built using a single stone.

he temple is dedicated to Lord Vishnu. The temple also has an idol of Lord Krishna along with the Meera Bai. To the uninitiated, Meera Bai was the wife of the Mewar king. She was a devout follower of Lord Krishna.  It is believed that the idol of Lord Krishna housing this temple is the same idol that Meera Bai used to worship in the state of Mewar, 600 years ago! This idol was saved from being destroyed during the Mughal attack on Mewar by Amer rulers & was brought to Amer.

According to the Hindu religion,  Lord Krishna is a reincarnation of the Lord Vishnu, which could possibly explain why the idol of Lord Krishna was placed in this temple.  Meera Bai considered Lord Krishna as her husband. Meera Bai’s idol has also been placed in this temple. Toran near the entrance bears testimony to this supposed marriage. Toran ceremony is one of the important rituals in Hindu marriage. The ceiling of this temple has beautiful frescoes though they have weakened due to the time & poor maintenance. Some historians mention that the above theory doesn’t fit well. It is likely that this temple must have been made as a Jain temple; subsequently before it was complete, it might have been offered to the king. This theory stems from the fact that such ornate Torans are essentially a Jain temple element. Also, Amer had a large Jain population. Many wealthy merchants and ministers in Amer court were Jain.

In a canopy adjoining the temple, is the idol of Garuda, which is a carrier of Lord Vishnu.

Beautiful carvings adorn the temple walls, especially the pedestal section and the canopy housing Garuda.  Army of elephants, horse and tiger face is depicted in the below picture.

There are two elephants in a playful mood at the base.  Procession and people are depicted in a jubilant mood in the second row. The top row has carvings of the birds quite possibly, peacock. Placed just above the pedestal are three marbles plates, depicting Indian mythological characters.

Another view of  Jagat Shiromani Temple.

How to reach Jagat Shiromani Temple?

Jagat Shiromani Temple is located in Amer town and can be easily reached within a few minutes from the Amer Fort. Take the left lane after the Amer Elephant Stand on the Amer Road. Meera Bai Temple is essential part of the hertitage walking tour of Amer town. Many walk leaders start or end their walk in Jagat Shiromani temple.

You can locate the temple with the help of this map.

Check out Heritage Temples of Jaipur 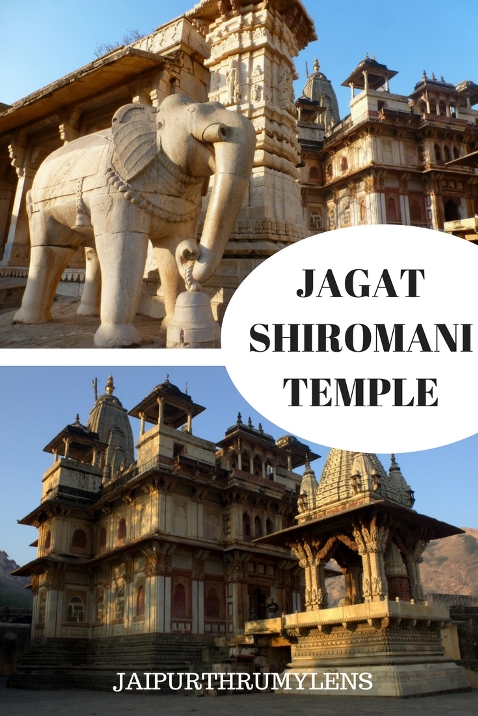