My first encounter with the sickle bush tree was two years ago during a hike in Nahargarh hills in Jaipur. I never paid attention to these trees despite hiking in this region because there is nothing striking about this tree. However, you can’t miss this tree because of its flowers during the monsoon season. The flower of this tree resembles the bottle brush in its appearance and has two striking colors – Pink and yellow! Slowly, the pink fades to reveal white color.

My second encounter with this tree was in the same year on a visit to the World Forestry Arboretum in Jaipur. Here are a few pictures from that trip. 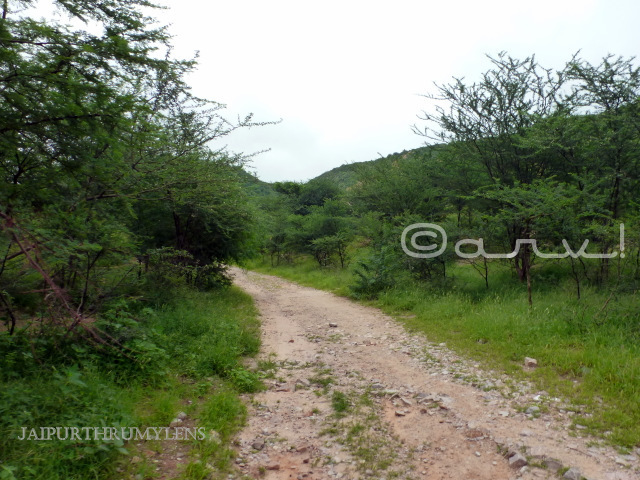 Subsequently, I also found them in Smriti Van, a landscaped forest land in the heart of Jaipur.

In the following year, I sighted this tree in Aravali hills near Amer. A fellow travel blogger who accompanied me during that hike was mesmerized by the shape & color of its flower. Back then, I had no clue about its name or details.

To be fair, Sickle Bush is more like a bush rather than a tree. Even though the botanist and foresters claim that it grows up to 20-25 feet, the ones I found in this region were not more than 7-8 feet tall. Maybe this variant doesn’t grow tall or it can be a geographical issue too.

I bet you haven’t heard about Thor Danda

The scientific name of the Sickle bush tree is Dichrostachys Cinerea & also known as Mimosa Cinerea. It is popular by many common names in India like Kunali, Khairi, Goya Khair, Veer Taru, Durangi Babool, Sigam Kathi, Neelajammi, Khoiridya, Marud, Vellantaru, and Viradru. In some countries, it is known as a Chinese lantern tree because of the shape & color of its flowers. The name Sickle Bush stems from its seedpods which are packed close together and curves in the shape of a sickle. I don’t have a picture of seedpod to share.

Last week during a hike, I sighted this tree in a large number.

In South Africa, it is popular as Kalahari Christmas tree or bell Mimosa. There is another curious name for this bush – Acacia puncture tyre because its spine is hard and often cause a puncture in tyre and it resembles Acacia tree family.

Sickle bush is part of Mimosa genus. Mimosa word is derived from the Greek language and it implies acting swiftly because some of the plants in this species are known to fold their leaves on touching or trapping insects. This genus can be confused with Acacia family because of similar looking features. But the distinguishing feature is that Mimosa flowers have less than ten stamens in its flowers. Many experts treat Sickle Bush tree to be a part of Acacia sub-family.

Dichrostachys Cinerea is generally found in dry deciduous forests. Exactly the kind of climate Aravali offers. Some even believe that it offers medicinal benefits. I am not aware of its Ayurvedic benefits but in Africa, the traditional tribes use it for its healing properties.

In many countries, this tree is considered invasive and unwanted. It makes a great plant for the Aravali hills because it adapts very well to the local climate. Due to the rocky base, heat and scanty water availability, very few plant species adapt well to local topography & climatic conditions. Dhok, Babool, Israeli Babool are most commonly found trees in Aravali hills. Here is a picture of Aravali hills post monsoon.  Do read this post – Hills are green which explains the change in topography of Aravali Hills with the onset of monsoon.

Forest department carried out extensive plantations of imported Acacia trees like Israeli Babool or Vilayati Babool till 1990’s in Aravali hill range across Rajasthan. However, these trees haven’t benefited local ecology. Due to their ill-effects, they are not being advocated anymore. This case is similar to Eucalyptus which was planted under a massive drive across many Indian states till 1980’s but owing to the soil underneath turning infertile, the popular opinion went against it. In Cuba and elsewhere in the Caribbean, this plant is considered invasive; a massive drive was undertaken to uproot these trees. It was introduced during the colonial rule and it is not found naturally in the American continent.

Check out other stories in Trees of Jaipur.

It is difficult to find a Sickle Bush tree in an urban area but it is quite easy to spot it in a hilly jungle. It is hardwood & locals here consider it as an excellent source of firewood. It can be safely concluded that Sickle Bush tree shies away from urban areas. If you are trekking in Aravalis and come across this flower, I’m sure you will recognize it. Have you ever seen this tree?

If you are a regular reader of Jaipurthrumylens, you must have read my previous posts on unique plants and trees of this region especially in Aravali hills where I hike regularly. I have already written about Thor Danda last year and Anogeissus Pendula. Have you read either of these? Read complete posts on trees found in Jaipur –  Trees of Jaipur