Teej is one of the two prominent local festivals of Jaipur, the other being Gangaur. It is celebrated in the month of Sawan as per the Hindu calendar. I decided to capture the festivities this year. The procession starts from Janani Deori in Jaipur City Palace moving through Tripolia Gate into the Tripolia Bazaar. I have already shared a few posts on Sawan celebrations in Jaipur. The first one was Jaipur in Sawan. Later, I shared a photography walk in Jaipur capturing Kanwar Yatra and Kanwariyas Kanwar Yatra In Jaipur.

Finding a place to park the car is incredibly difficult owing to the congestion and ongoing metro work; I decided to not drive down to the walled city. The traffic is restricted in large parts of the old city due to the procession. I hired an Uber to reach Choti Chaupar which is on the route of Teej procession.

With ample time on hand before the Teej Sawaari began, I thought of exploring the by-lanes of Purani Basti in the vicinity. Purani Basti is one of the nine blocks of Jaipur founded by Maharaja Sawai Jai Singh II. Compared to the other blocks, this is one of the less commercialized areas of the walled city.

Amongst the many places that I explored, an old temple dedicated to Lord Jagannath Ji caught my attention. The priest who hails from Puri in Orissa claims the idol was brought from Orissa, a few centuries ago. The temple is architecturally unremarkable and the idol is consecrated in a dwelling unit. I didn’t expect to find a Jagan Nath Ji temple in Jaipur.

Maharaja Sawai Jai Singh II, the founder of Jaipur invited priests from across the country to settle in Jaipur. It is for this exact reason that Hindu temples of various sects of Hinduism can be found in Jaipur.

Upon realizing it was time for the Teej procession to start, I retraced back and contemplated whether I should wait at Chhoti Chaupar for the procession? Another alternative was to head towards Tripolia Gate. With the limited photography opportunity at the Triploia Gate owing to the tremendous rush, I decided to stay put. Tripolia Gate witnesses a lot of action with the presence of media and hundreds of photographers.

On a quest to search for an appropriate vantage point, I contemplated at securing space on the roof of a colonnade. These were constructed by Jaipur rulers as a viewing deck for the public to witness public processions.

To my bad luck, the police constable guarding the space urged people to vacate the spot. He was directed not to allow people to gather on the roof. Authorities feared the structures wouldn’t be able to withstand the increased load of people. It is understandable. The ongoing metro work in the walled city has led to the weakening of the ancient buildings and structures. A fact refuted by the authorities. I found a spot at the other end of Tripolia Bazaar.

Thousands of people lined either side of the road. Teej festival attracts people from neighboring villages in huge numbers.

I saw groups of the Valmiki community carrying beautifully adorned poles, one after another. A local mentioned these processions originated from the temples in the residential areas. These poles are called “Gogaji Maharaj Ke Nishaan”. They are 11 in number. These poles are at the forefront of the Teej procession. All these assemble at a designated place in Chaugan Stadium.  A group of policemen led by a superintendent who was on a patrol to ensure everything is in place. Finding people sitting on the viewing deck of the colonnade vexed the superintendent. He promptly ordered the constables to get the place vacated.

Among the motley were a variety of jesters like the mythological character Rawan, snake charmers with their Pungis,  Kachi Ghodi dancers, drummers, fire breathers to name a few. 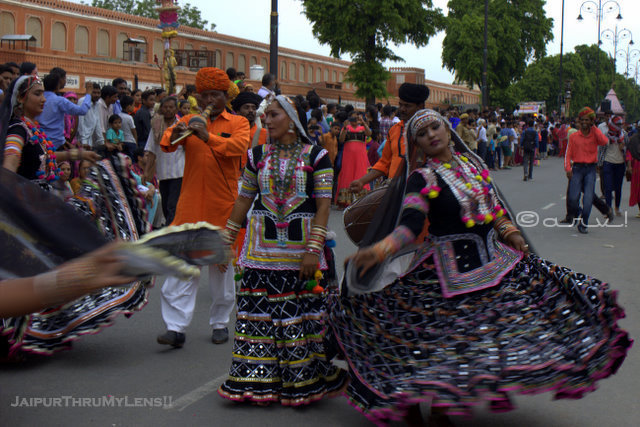 Following them, were bullock carts and a mock camel corp along with a canon. Jaipur state maintained a camel corp before Indian independence. The troops from the state fought with Allied forces in the WW I and II.

The elephant bearing the flag of “Jeypore state” – the Panchranga led the palanquin with the idol of Parvati. Marching along was a leading music band of Jaipur. 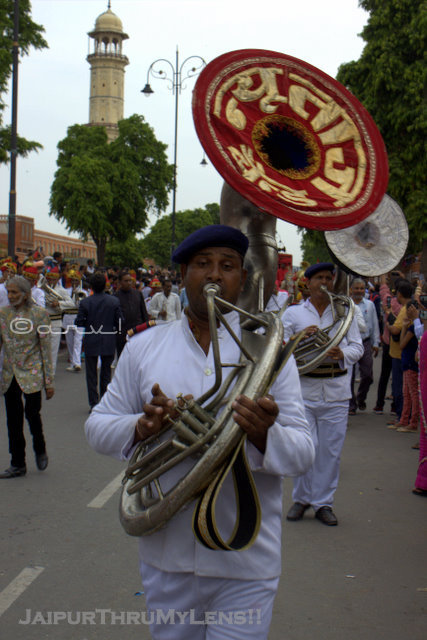 The security around the palanquin was top-notch. The female constables were walking along in a single file gripping a thick rope. The dress code of the men leading the idol was white Achkan with red turbans. 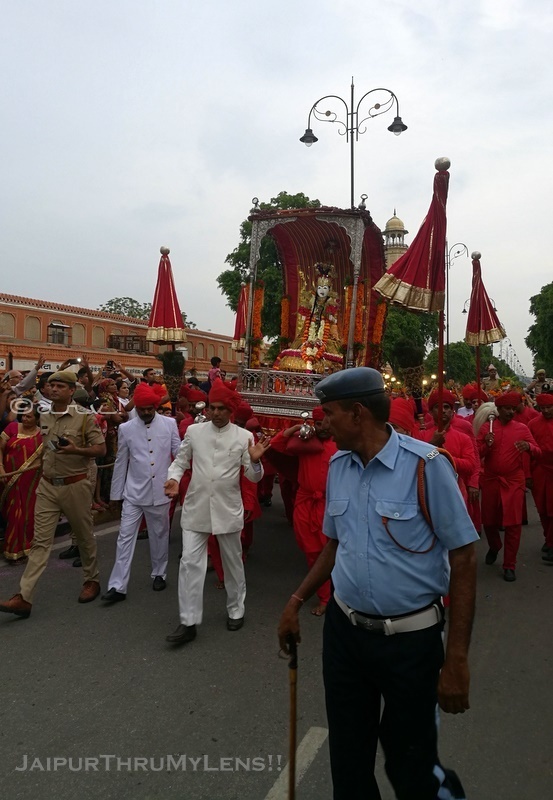 The traffic was restricted. This scene conjured up old memories of the Teej Mela taking place in Ram Niwas garden. People would flock in the area around Albert Hall to celebrate Teej. The entire area used to be chaotic with horse carts, food vendors, and people from the surrounding villages. All that has changed over the years.

I walked up to MI Road since the traffic was not permitted in the walled city. This was the closest place where I could hail an Uber. As I was walked through the Kishanpol Bazaar, I found an interesting door to capture.

I strongly recommend the Teej festival in Jaipur to travelers because it is a remarkable way to experience Rajasthani culture and rituals. The best way to experience this festival is to hire a local who can explain everything in detail with context. If you believe in “travel deeper” or “explore more”, this must be on your list.

What is religious and historical importance of Teej Festival?

Teej is celebrated in the months of Sawan which is dedicated to Lord Shiva. This month has many rituals and ceremonies. As per religious texts, Teej signifies the union of Lord Shiva with Parvati, his consort. Some people consider Teej synonymous with fertility. Women fast for the prolonged life of their husband. Parents send gifts to their married daughter. Teej is called “Sinjara” among locals. As per prevalent customs, Ghevar and Leheriya Sarees are gifted to the daughter. Women adorn themselves with Leheriyas. If you haven’t heard of or tasted Ghevar, a Rajasthani sweet delicacy read Jaipur Ghevar. 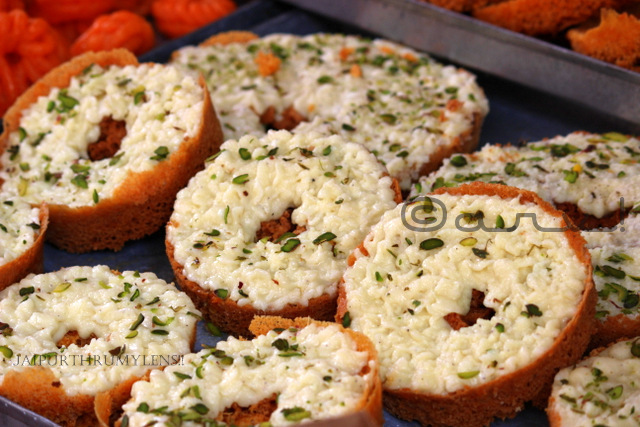 Teej is associated with women, Leheria dresses, and the swings in the garden. The swings are hard to find these days in urban areas, but the tradition is still prevalent in rural areas. Teej is celebrated in Rajasthan, Uttar Pradesh, Haryana, and other states in North India and Nepal. The rituals are not the same but differ from state to state. 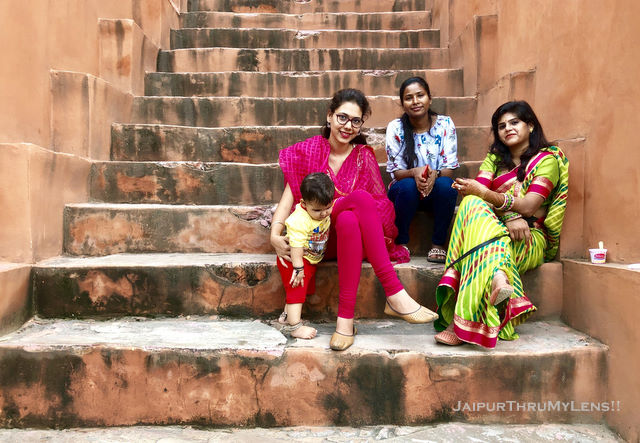 One of the four gates in Jaipur City Palace is called Leheria gate because it replicates the Leheria print.

Some historians claim the Teej festival in Jaipur was celebrated for three continuous days. While the procession was taken out in the walled city on day 1, on day two, the procession route was Ghat Ki Guni. The current procession route came to being after independence. Prior to this, the route was from Sirehdyodi Bazaar to Badi Chaupar near Hawa Mahal.

Is it worth seeing the Teej Festival procession in Jaipur?

Teej is one of the two notable festivals of Rajasthan. The tradition of celebrating Teej with a public procession which is referred to as “Teej Ki Sawaari” or “Teej Sawari” is as old as the city. It attracts tourists from around the world and showcases the culture and tradition of Jaipur. The atmosphere in the street is jubilant. 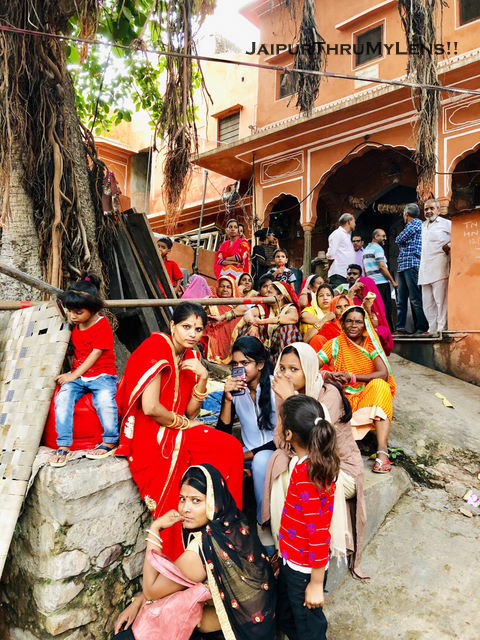 Where to witness the Teej Festival in Jaipur?

One can witness the Teej festival procession in one or all of these places – Tripolia Bazaar, Chhoti Chaupar, and Gangauri Bazaar. Rajasthan Tourism Development Corporation in a bid to promote tourism provides special seating in front of the Tripolia Gate. Make a note, the streets are extremely crowded as it draws thousands of people.

What are dates for Teej Festival in Jaipur?

Teej is celebrated on the third day after the new moon during Sawan. The procession is taken out on two consecutive days.  The corresponding dates in the English/Gregorian calendar change every year and fall in July/August. There are three different Teej -Kajari Teej, Hartalika Teej & Hariyali Teej. In Jaipur, Haryali Teej is the most revered and celebrated.

What is the route of Teej Festival procession in Jaipur? 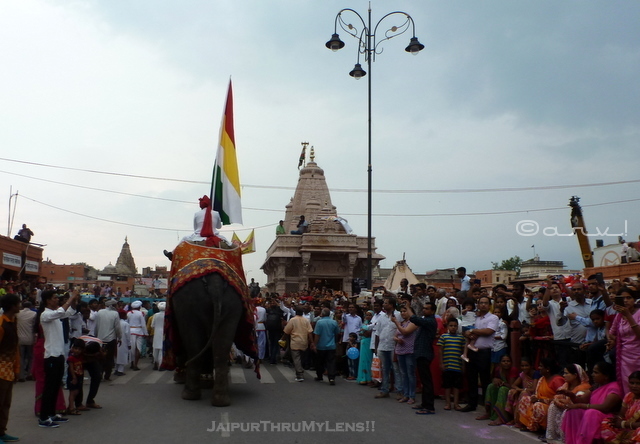 53 thoughts on “Why Is Jaipur Teej Festival A Great Cultural Experience?”