Humans built museums to store and display historical, scientific, artistic, and cultural objects. Most museums curate objects from the past. The moment someone mentions the word museum, it implies history. The Museum of Legacies is a new addition to the list of museums in Jaipur. 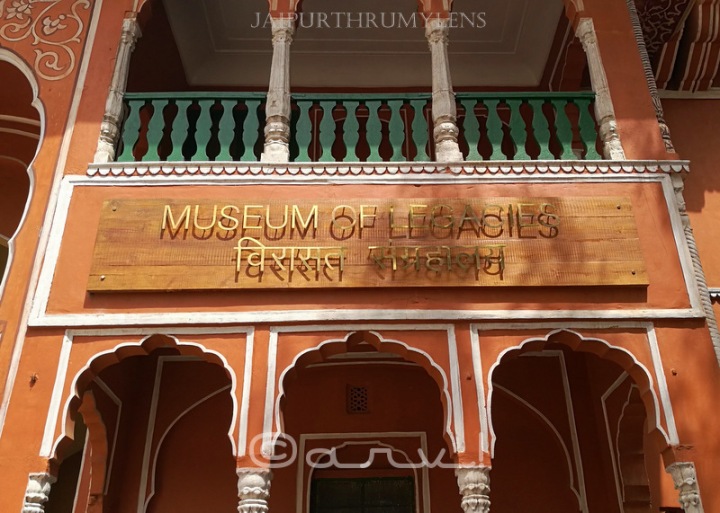 History of Museum of Legacies / Rajasthan School of Arts & Crafts

The museum is housed in a Haveli of an important minister in the court of Jaipur –Pandit Shiv Deen. The popular opinion is he donated his residence to the ruling king to be converted into an art school. For years, this Haveli was called Rajasthan School of Arts. In 1857 AD Maharaja Sawai Ram Singh II established the school of arts, later called Maharaja School of Arts & Crafts. It was in use as an art school for many years.

For 29 years it was called – Madarsaa-e-Hunar which implies the school of arts & skills. Thereafter it was popular as the Maharaja School of Arts & Crafts. As per available information, Pandit Shiv Deen was the first principal of Jaipur Maharajah college in 1844 AD. He was a tutor to Maharajah Ram Singh II  (1835-1880 AD)

Museum of Legacies is situated in Kishanpol Bazaar, one of the prominent bazaars of the walled city area in Jaipur. The museum is run by the Department of Archaeology. Popular tourist attractions like Jantar Mantar, Hawa Mahal, and Nahargarh Fort are managed by this department.

There have been talks to convert this Haveli into a museum for a long time. The building was closed to the public during the last few years under the renovation plan. I had an opportunity to explore this building during one of the events in Jaipur – Travel Photo Jaipur. You can read about my exploration of this building in this post. Travel Postcard Exhibition

Sharing a few pictures from my last visit to what was then called Maharajah school of arts & craft.

Here are a few pictures of the Museum of Legacies from my recent visit. 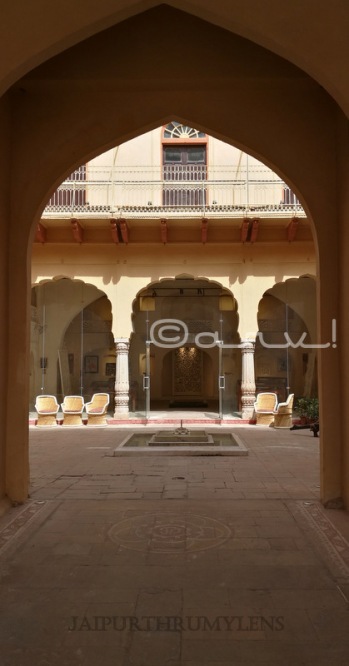 From the courtyard, one can choose to visit any of the three galleries on the ground floor. I chose a gallery on the left side – the fabric and garment section. It is the biggest of all three galleries. Called Everyday Embroideries, it focuses on embroidery work on fabrics.

Rajasthan has a rich tradition of embroidery work and the articles on display highlight the same. The gallery has a few pieces on display. Unlike traditional museums, it is patterned on the “Boutique” layout. I flipped through the display but wasn’t impressed. Even though there is a description beneath each, it doesn’t add to the experience.

I strongly feel that before one starts with the exhibits he or she should have a clear understanding of things to expect. The museum ignores certain regions of the state. Rajasthan is a huge territory and has a diversity of clothes and garments. They are not captured fully in this museum.

This mezzanine floor has a section dedicated to tribal art especially the Bhil art of Rajasthan. The section is interesting and colorful & follows a different style and pattern. Here are a few pictures from this section. 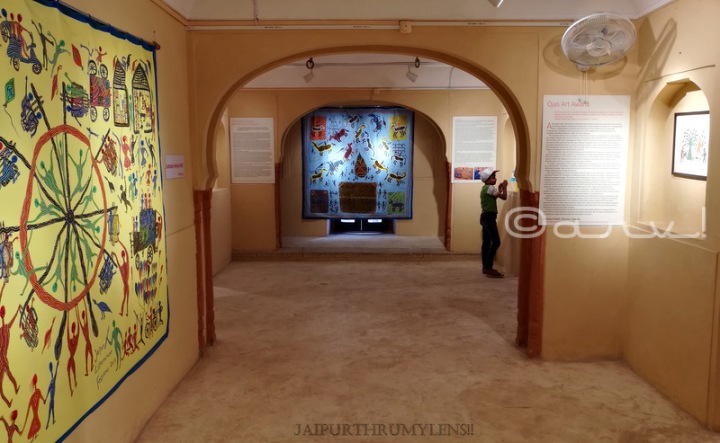 The second gallery on the ground floor has art pieces. It is called Visual Journeys and contains a small collection. Some of the pieces curated here are unique and outstanding. 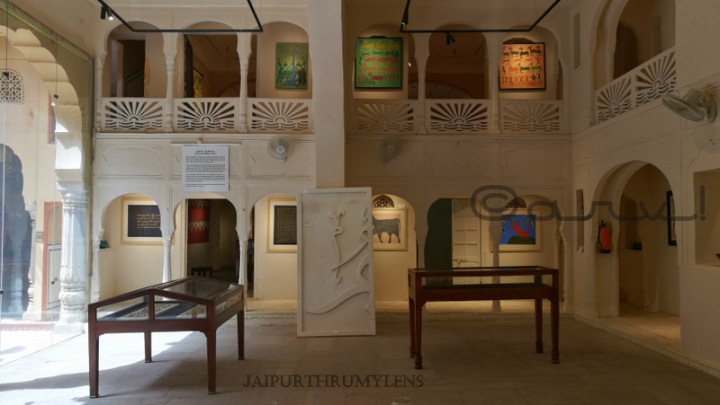 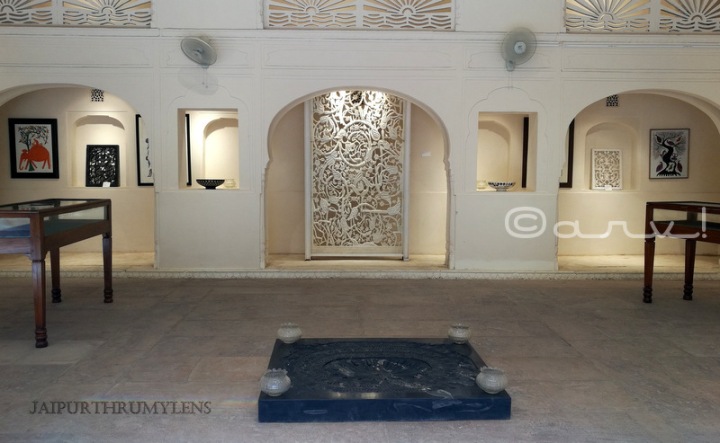 Two of my favorite ones are marble jali and Chhipkali Pakshi artwork. Marble Jali is made out of white marble from the Aandhi region in Rajasthan and is inspired by the painted ceiling in Jaipur City Palace. It is a beautifully carved piece presented as a lattice or Jali.

Chhipkali Pakshi is a painting in the Gond style. Gond is a tribal painting from central India. This painting has a lizard and a bird. Gond art is not well known even in India.

From this section, I moved on to the third section on the ground floor having a display of jewelry as well as photographs of tribals with jewelry. There were a few jewelry pieces on display and the walls were adorned with illustrations and photos. The display pieces were mostly silver work. 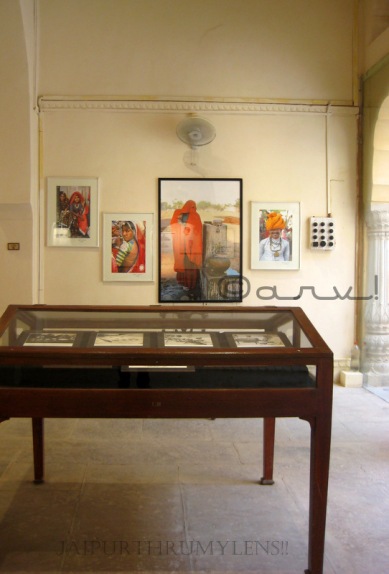 Only two galleries are open to the visitors on this floor. The first gallery has two giant Rajasthani puppets.

The second gallery focuses on Pichwai paintings i.e. Nathdwara style Pichwai as well as its variant, Kota style. I have already provided details about Nathdwara style paintings in my write-up Stories of real artists from Jaipur Kala Mahotsav

Pichwai is a painting made on textile & hung behind the idol of Srinath Ji, an incarnation of Lord Krishna. This style of painting is popular in Nathdwara, Mewar (Udaipur)  Rajasthan. Earlier it was used in temples but over a period of time, this started being used as wall adornment in residences. Pichwai paintings are rich and detailed.

This is a small gallery and has very few paintings on the wall. With nothing else to see the tour of the Museum of Legacies came to an end.

As I descended the stairs on way back, I wondered whether it was worth a visit?

Here are my views on the Museum Of legacies. The word Museum of Legacies is quite vague and not cohesive. It doesn’t conjure up any images. Two, the collection on display is neither convincing nor complete as it comprises random pieces. Ideally, each collection should at least represent a complete geographical area or a certain time period. It does neither.

Four, Kishanpole Bazar is off the tourist map. With nothing else to explore around, it is unlikely that many tourists will visit the Museum Of Legacies. The manner in which the heritage look of Kishanpole Bazar is being tinkered with lately in the name of a “smart city” is not encouraging. It has been chosen as an ideal market for this project. The entire market has been dug up under the name of “Jaipur Smart City Project“. It will complete in a few months but the heritage conservationists have raised an alarm as it has altered the original form and look of the market. Many people have questioned the motives of the authorities.

State governments receive grants for a specific project from the central government. A few years ago, low-floor buses were given to select cities under the JNURM project and now it is the Smart City project. Can a city become smart by undertaking “unwanted” beautification and spoiling its heritage look? Why only one market is being modeled for Jaipur Smart City Project? It is simply an eyewash and wastage of resources. When the authorities fail at basic things like parking facilities, waste, and traffic management, wasting money on “unwanted” beautification is nothing less than an offense.

Here are two pictures of Ajmeri Gate, one of the eight old Gates of Jaipur –  Before and after the “Jaipur smart city project” beautification drive. Just for your information, Ajmeri Gate leads to the Kishanpol Bazar. 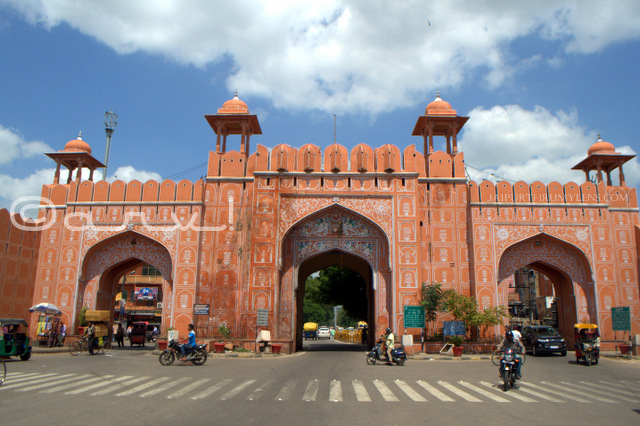 A huge fountain has been added along with a divider spoiling its heritage look.

Do read my post on heritage conservation  Our Attitude Towards Heritage Needs A Big Change?

The authorities need to reconsider what they want to show and depict. The current display collection is not convincing enough to attract visitors/tourists. This new museum in Jaipur doesn’t do justice to the building considering its legacy and how it has been associated with art and craft for centuries. If you are visiting Jaipur and love art and architecture, do explore and let me know your thoughts on the Museum Of Legacies. I will recommend a visit to this beautiful Haveli for all its beauty and heritage.

Adaptive use of the Haveli Architecture

Museum of Legacies is a good example of the adaptive use of Havelis. The building has been adapted twice ever since it was built for residential use. The first change took place when it was converted into an art & craft school. The second use was when it was turned into a museum. It is a good example of how we can repurpose our heritage buildings. Many architecture students visit Jaipur for case studies on the repurposing of old buildings. Museum of Legacies is a good case study for architecture students.

Museum Of Legacies entry fee: Free for the time being (promotional)

Update January 2020 – The museum building is open but the collections have been taken off. I suppose this is because of a change in the state government; the museum was inaugurated during the term of the previous government. There is talk of relaunching this museum with another collection but there is no official statement yet. 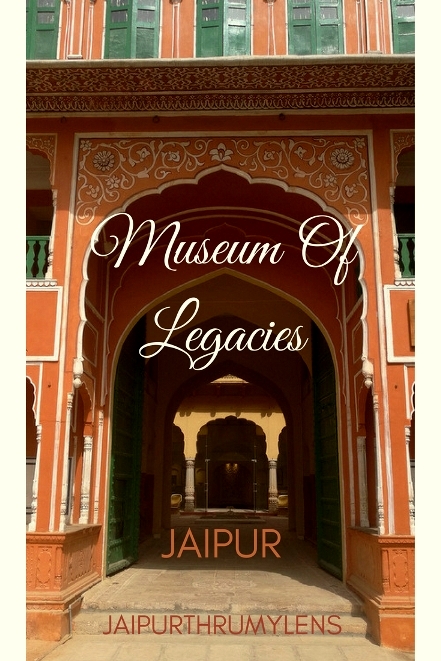